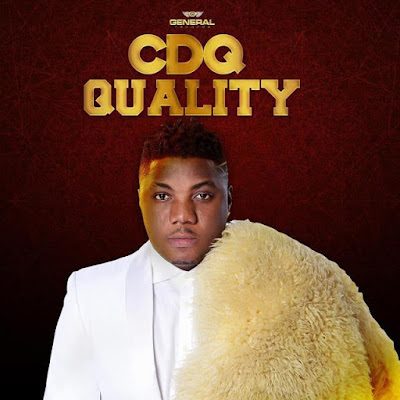 CDQ came into the music scene a few years back as a versatile underground rapper who dropped bars in Yoruba, pidgin and his infamous use of notable slangs (Woss Woss Wobi) which he is well known for. He started gaining attention after winning a rap battle at Industry Nite in December 2012. CDQ was consistent with excellent performances, so consistent that he caught the eye of super-talented record producer “Masterkraft” who is notable for producing songs for Banky W and other big names in the Nigerian music industry and subsequently handed a record deal to CDQ and signed him to his General Records imprint.

CDQ went on to release several songs under his new label and started to gain the recognition that he deserved. His big break came when he dropped one of the biggest songs at the time, “Indomie” featuring Olamide that went on to top charts and was played all over the country. There seemed to be no stopping for this Yoruba rapper who gradually developed his brand and continued to put out the right materials that would gain him his cult followership.

The Quality Album is the type that was already getting mixed reviews and wasn’t shown any love in its anticipation because of the bad press it got when the album cover and Track list surfaced the internet, Most especially the feedback it got on Twitter. It was slandered on all fronts because of its mediocre cover art and the notable errors that were found in the spelling of the names of persons that were involved in the album. All this followed and people thought it was done on purpose but up until now no response has been made from CDQ’s PR team.

The album starts off slowly with the song “Shanowole” featuring Ice Prince. Which is better off recorded as a jingle than a proper song or even album material, CDQ was decent lyrically, while it was a below average effort from Ice Prince. Salaro is already a fan favorite with its depth and quality of the beat to the song and CDQ got it right with his delivery & storytelling for this type of song. Track 3 “Ferrari” also which is only an exceptional track because of its hook and it’s up tempo beat. CDQ was easily predictable with his verses to this song and he was caught lacking with the content in this song. Finally we get a familiar record on this album that brings life to this body of work with the song “Nowo e soke” featuring Wizkid which has to be CDQ’s biggest song till date. Both performers on this song did a splendid job. You can’t be found dulling when this Masterkraft produced track is been played. It sets you in the right mind set to have a great night out.

The next track which I feel had the prior intention to be the intro to this album is actually a really disappointing and basic Skit done by popular TV presenter VJ Adams who lacked the right attitude in delivering an exciting speech for an album material. CDQ would argue with you that he is confident of getting the bragging rights that can be linked to a proper hip hop record; 4AM is the track that enabled CDQ to show his skills on a proper hip hop beat. He got the right ingredients needed for this type of song, he was decent with the word play but wasn’t sure how hardcore he wanted to be on the song as it was evident in the short duration of the song (3.03) minutes.

Track 7 Oobi featuring Cayana is where CDQ addresses his haters and nay sayers on the album, He spits one of his best rap performances on this album here. CDQ was in tandem with the piano instrumental of this song in his delivery. Talosobe is CDQ’s version of the famous “Jor ooh” which lacks an original concept to it but he was able to link the song properly with the track before it and made up for whatever downside he had in the song with his delivery and album arrangement.

The next track FCFS (First come first song) is a meaningless song. It just had the right melody to it and CDQ was in the right zone to deliver exactly what was needed for this type of song, he was just having fun with this song. CDQ stayed true to the artistic persona for this type of record. He enlisted the help of RnB heavyweight, Banky W to help him with this wonderful record titled “Odikwa Ok”. Banky made CDQ comfortable on this record and it made him fine tune and slow down his verses to be very smooth and he did a decent job lyrically while trying to proclaim how much he was in love with his special woman. The drums and minimum kicks in this song didn’t make a boring one to listen to.

All songs aside the R’n’B song had the same monotonous sound to it and it was time to switch up the style a little with a dancehall track “Sun Seyin” which has a fast-frenetic vibe to it, one for the clubs and looked like a result of a studio session where CDQ was having fun in the booth and recorded something he felt would put his listeners in a happy and full-groove mood. CDQ finally outsourced his second skit material on this album to someone who is worthy and could deliver with his content in the person of talented & fast rising comedian/performer Kenny Blaq; who did an excellent job with his delivery and had a great outing with his smooth voice while he heaped praises on CDQ, also fondling around with slangs as used by Cdq’s woss wobi and gave it, it’s actually meaning.

Olowo fe Wole/ olowo fe Wole wa/ which means a rich & wealthy person wants to enter; is the record which had fellow indigenous Yoruba rapper, Reminisce on it. This record is easily a stand out track on the album because of its perfect live performance recording and top notch production. Reminisce came through on the song and does what he does best on a record like this. His presence was also effective and influenced how CDQ executed his own part of the song, really well.

Track 14 “Otishe” had Gabanabwoy on the hook. On this record CDQ counts his blessings to God and states how grateful coming he is coming from a humble, poor background to his path to stardom. A laid back effort but is an all-around smooth & feel good song with decent story telling.

Abo featuring veteran rapper Vector is another stand out song on this album. “Abo” which is a Yoruba term and can be used in various ways, but in this song it was personified to be a female/woman. Vector got his well-deserved bragging rights on this record on the hook and his verse, CDQ also did a decent job with his flow. Another hip-hop song on this album that had an east coast/west coast rap feel to it.

The next track on the album, “Indomie” is a song that shouldn’t have been included in this album or better still another version should have been performed for the album; the entire purpose of this song has already been fulfilled and the song had already been milked out for the right reasons, it’s inclusion was not a smart move from CDQ which could make a case as to whether he is really hardworking and willing to take risks. The album draws to a close with the song “Gbemisaya” featuring Skales which is another predictable & expected track from an artiste like CDQ, another song I was not expecting on the album.

Listening to this album was not exciting. It puts one in different moods and gets one really confused as to what the contents of the album was trying to sell to the listeners. CDQ could be seen as being reluctant to record something ‘new’ most of the tracks on the album look pretty old. In an attempt for the Quality album to showcase CDQ’s talent, all tracks almost had the same exact message to it. In summary, this album lacked the right creative direction and A& R credit that should be associated to it. Notable issues on this album is the important case of the VJ Adams skit which is my opinion is pure trash, the skit should have been given to someone like DadaBoy Ehiz to handle.

Stand out tracks on this album have to be Ferrari, Odikwa OK, Olowo and Abo. Four very good songs out of 17 is not good enough. I believe there is still room for improvement for CDQ. 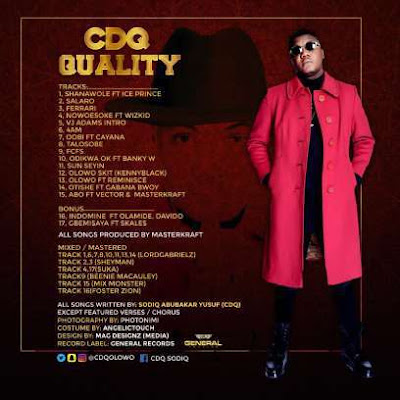