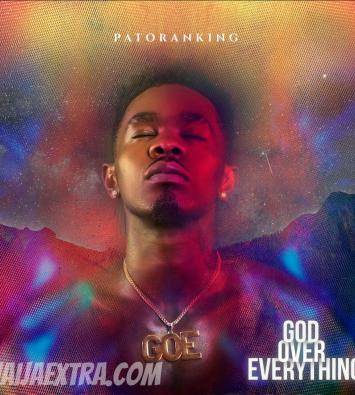 ARTIST NAME: PATORANKING
ALBUM NAME: GOD OVER EVERYTHING
LABEL: FOSTON MUSIK/VP RECORDS
Patrick Nnaemeka Okorie better known by his stage name ‘Patoranking, is a vibrant, energetic reggae-dancehall artiste. Coming off the shoulders of being Timaya’s protege, he has developed himself as a force to be reckoned with, not just in the reggae-dancehall scene but the entire Nigerian music industry with his versatility. Patoranking proved himself with the very much accepted Alubarika featuring Timaya which set the path to greatness for this dancehall act.

He has dropped hits after hits, getting consigns from the crème de la crème of the industry and also being featured on the right records. It only seemed right that this young man could do no wrong and topped it all off by winning the Next Rated Artiste at The Headies in 2014 which had the likes of Skales, Yemi Alade, Orezi and Runtown in the highly competitive category but He came out on top. He followed this feat by not slowing the buzz down and putting out massive singles to keep up with the pressure of being the next rated artiste and eventually not disappointing his fans, so basically he needed to put out a body of work to show how hardworking he is and what differentiates him from the regular Nigerian artiste; and here you have it #GodOverEverything, his first album.

The album opens with the track “Patoranking”, with Patoranking’s mother taking the introduction to the song, it’s set to set the pace into what the album should sound like. It really kicks off with a cheering sample over a heavy kick beat which Patoranking took over with below average lyrics because the entire song fell off because the supposedly simple introduction turned into a ridiculously boring record; at the point of when the crowd started cheering him the song should have ended there with the tag “Welcome To The Album God Over Everything”. The next track “God Over Thing” which is supposed to be the heart & soul of this body of work as the album is named after it,is really a below average performance from Patoranking. The content of the song is just too typical and there’s nothing exciting about the song. He couldn’t even tell a better story of his musical journey as he did on Alubarika. The song is really just set up to put one to sleep.

Track 3; No Cheating Zone is actually a feel good reggae type of song but the record lacks the much needed depth and quality. The beat to the song is too weak. Patoranking chose the wrong producer and beat to that song. He just delivered what could look like the gospel artiste, “Buchi” type of early 2000 record. Fast forward to the sixth track “This Kind Luv” featuring Wizkid is when the album actually picks up, the entire arrangement of this record is excellent, superb guitar strings and the right percussion that this kind of record actually needed and obviously the Wizkid impact made this record a 100%. Pato got everything right on this record, brilliant song writing too. The follow up track “Killing Me” is actually a shadow of the one with Wizkid. An average song because it lacked the right arrangement and it actually exposed Patoranking vocally.. probably the mixing and mastering engineer’s fault.

The next track “Writing On The Wall” produced by the famous music director “GospelOnDeBeatz” is headed in the direction of a well-written smooth reggae song but Pato got it all wrong with the song’s content; the case right here is that he was disorganized as what to say on the song, one minute he was counting his blessings the other minute he just got lost in the song and kept deviating. With the well recorded fusion of the saxophone and other related instruments the next track “Forever” is a massive record ,Patoranking brought his own sort of feel to what he feels R’n’B should sound like he gave a brand new Flavour to this huge song, with the female additional vocals that gave strength to this song. He says a lot about the feelings he has for his special woman and hope she listens; one of the stand out tracks on the album. A song that makes you want to move a part of your body without even forcing it.

Track 9 “No Kissing Baby” featuring Sarkodie, the lead single of this body of work is already a fan favorite, a brilliant record that Patoranking delivered effortlessly, he got everything spot-on on this record. This was the foundation of this album but Patoranking had other plans.

Patoranking worked with Major Bangz on this record and decided to feature Mainland’s finest “Olamide baddo” on this track titled “Mama Aboyo” which is an epic failure of a record and I’m utterly disappointed that it was included in this album. Here you have the perfect beat for a galala type of song but Olamide didn’t even fuse well with the song, the chorus and entire content of the song is just too poor. Pato got over excited on the song that he even seemed confident to record a below average vocals to this, then at a point they switched up the levels to try to put in a bit of that techno which just showed the poor arrangement of the song. Stammerer produced by Wizzy Pro the maestro behind the hit single “emergency” is a decent record, above average song writing with witty lyrics and Pato had fun with his acceptable wordplay over this smooth highlife beat; this love song type of record is what I should believe is what Patoranking had the plan that track 2 “God over everything” would sound like. Patoranking did a decent live performance rendering on this record. Pato shows how talented he actually he is on “Love town” which has the Jamaican Caribbean reggae feel to it that set it and himself from the regular reggae song & artist. The Marley brothers should really be proud to hear this one. Patoranking had fun throughout the song and stayed true to his art. The hook of the song gets to you and sets you in a really happy mood; as great music affects your mood. The next track “Hale hale” has Patoranking singing nicely over this well-orchestrated ekelly produced smooth beat. A laid back effort from Patoranking but is a really good song; but it has a boring content to it. The next track “Beautiful” to me is what deceit should feel like, It’s song that starts off with putting the listener in suspense as to whether we are about to get a sample of the hit song Damien Marley & Bobby Brown did together with the same name “Beautiful”; and again Patoranking had other plans and changed the entire mood to this song which resulted into a boring record but the song picks itself up in the middle with its perfect recording & production.

The second to the last song on the album has Jamaican dancehall recording artiste on it “Elephant man”; “Daniella Whine” is already a big song in the market in which he got so many recognition for including his Absolut vodka endorsement. I’m glad Patoranking added something different to it and gave it a special rendition by allowing the energy and charm of elephant me to give the song a different twist to the already amazing dancehall record. The complete package that a dancehall song should have. The OGs of the dancehall/reggae genre came to finish work on this record.

What perfect way to end this sixteen-track album than to feature the legendary Fuji musician King Wasiu Ayinde Marshall. The song “Ayinde” is easily the best song on this album; it’s different, Patoranking broke the norm and showed how versatile he can be. He got everything spot on this record and even delivering vocals in Yoruba and paying homage to Yoruba carefree owambe party scene. K1 picked up from the intro of the song rendering the much needed oriki to the song, even greeting and praising Patoranking in the song and obviously doing why he does best in his delivery and giving that legendary factor to this record. The song was produced by Major Banks who fused in the right bata drum and the smooth kicks that the record needed. From the arrangement to the lyrics of the song, it’s a perfectly rendered orchestrated record.
With the below par records this album had it wouldn’t hurt to have had two songs that had the same Fuji sound on the album.

This album lacked the needed ingredients that a debut should have; it lacked the proper creative direction that it should have had, it lacked proper A&R direction that it should have had. Patoranking got the producers selection list wrong on some tracks on the album. My opinion is that he should enlisted the help of his mentor “Timaya’ on this album. The album was already two years late from Patoranking and in my opinion I feel he rushed the entire process on the album. The album can only be saved by the right publicty and promotion or less this entire body of work won’t be around for a long time. And also Patoranking and his team did not actually get the perfect timing as to making a strategic decision as to when to put out the album.

All On Nothing Fitnes with Dizzy: Simplicity