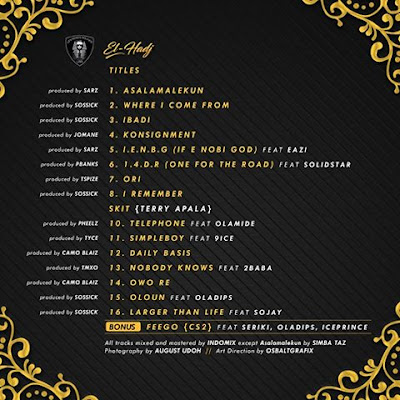 Reminisce, who besides Olamide is one of the most highly regarded indigenous rap musicians in Nigeria. He put out the infamous motto “street ti takeover, punchline o ja wo mo” even though perceived by many to be a petty output from a rapper of his caliber, he is still successfully riding on the impact and effect that the particular line is continuously having in the Nigerian music industry of today. Remilekun Safaru is back at it with the release of his fourth studio album titled “EL-HADJ”.

The album opens with its lead single which was released earlier this year, “Asamalekun” produced by Sarz; which is a brilliant hip hop record. Reminisce got the right instrumental to suit this type of song perfectly. The entire content is spot-on, though a hip hop song you’d be urged to groove to it.

The next track “Where I Come From” produced by Sossick is another decent piece of work on the album; a simple beat, simple content & storyline and is Baba Hafusa’s contribution to give a brief message about the current state of affairs of our great country Nigeria.

The third track on this album “Ibadi” is a smooth and enjoyable song. Here, we see how he channels his inner Christian Grey fantasies to a female that he is supposedly having regular sexual activities with.

At this point in the album, Reminisce decided to switch up the style and make one for the clubs “Konsignment” produced by promising record producer “Jomane“. The song came with the needed percussion instruments, samples and background vocals, this made it the perfect dancehall jam.

I.N.B.G (If E No Be God) featuring Mr Eazi is that type of song that should be regarded as “back to regular activities” on the album. Here, Alaga Ibile showcased his rapping skills and Mr Eazi delivered a nice hook that is sure to grow on you.

A surprise guest in the person of  Solidstar featured on the next track “One for the Road“which simply showcased Reminisce’s versatility as he decided to sing while proclaiming the activities he’d like to do with his special someone in a long distance relationship. Solidstar’s performance on this song is an impressive one.

Track 7 “Ori” is a sweet song which would be enjoyed by the young and most especially the old because it has a fusion of the 80’s Fuji sound, content and verses. One for the Owambe-Saturday-Scene. Reminisce had a nice time on this song and delivered effortlessly.

This track is followed up by “I Remember” which definitely came from a special place in his life. The song is very deep & magical that it almost brings the listeners to Reminisce’s doorstep as they get more informed as to his entire musical journey. This is an exceptional track with timeless rap verses.

Track 9 which is an excellent skit done by the current face of the apala sound in Nigeria, “Terry Apala” which he delivered in Yoruba and has that Oriki feeling to it that makes it pretty enjoyable as he was praising Reminisce.

You could say the Nigerian rap game is quite predictable and not exciting because of the absence of any major beef to spice things up and the next track just backed up this popular notion in the manner of “Telephone” featuring Olamide; which is another type of song that Olamide would be associated with if both parties aren’t being too serious and just having a good time in the studio and resulted in a nice record.

This track is followed up with “Simple boy” featuring 9ice which is another exceptional song on the album as 9ice took us back to the way his sound impacted the Nigerian music industry during his Photocopy & Gongo Aso wave. He just reminded us of his evergreen coarse voice and serenaded us with his perfect delivery over the background bata drum as Reminisce was playful with his verses; this is also another one that should be relevant for the Owambe Scene.

Reminisce decided to be once again versatile as he pulled off a decent highlife track “Daily Basis” produced by Camo Blaiz; which might have slightly exposed him as to why he is clearly not a vocalist and a rapper is an overall good song with its conclusive storyline.

Track 13 “Nobody Knows” has the legend 2Baba on the hook. It is a good effort on the album with its Topnotch recording and got the perfect instrumental to back up the lyrics. As the album is about to get to its climax, Reminisce decided to switch things up by getting the arrangement right on the album and get people dancing by including the fan favorite song “Owo re” which might be another re-make of his popular Tesojue record but my guess is that he wanted to achieve a particular motive with the inclusion of this song and got it right; the beat of this song also goes hard.

The next track has the main man behind most of the instrumentals on this album “Sossick” in its additional vocals and hooks which made the song a standout track on this album. It has the components of what a proper hardcore rap record would be like; Reminisce delivered with his Gangster like verses (storyline), it features the new kid “Oladips” who did okay in his verses.

Track 15 featuring the talented vocalist “Sojay” is another perfect-like record; you find the right components that should be found in a great song here; another attempt by Reminsce to create a timeless record.
The album finally draws to a close with “Feego” featuring Seriki, Oladips & Iceprince; which is something like an underground cypher-session record with all rappers trying to outshine their counterparts. It’s included as a bonus track on the album; I also think its inclusion paid off as it was highly important that this album ended on a really high note. 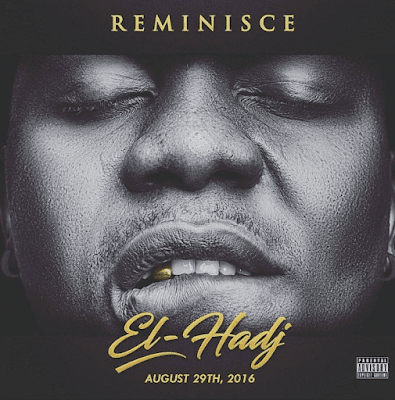 The EL-HADJ album is undoubtedly a masterpiece; and showcased how versatile Reminisce is. It also stipulated the fact that he is a brilliant recording-artiste from the choice of beats for this album and the entire lyrical content of the tracks on this body of work. This album is enjoyable from start to finish; it starts off like a movie that you’d want to sit down and be excited as to know what happens in the end. So many good songs on this album, a few timeless song materials too and the sound on some songs are really relevant that the album won’t be forgotten so soon. Reminisce really delivered, the only downside on this album has to be Oloun featuring Oladips.

Chronicles of A Learner: The Loose Girls Series By Bash Aleee