About a month ago, I wrote a review of one of my favourite books from Farafina, and it was then that I knew the things we enjoy the most, are the ones most difficult to discuss. Fondness masks objectivity, making aversion a virtue for review works, a virtue I failed to possess with ‘Dimeji “Bash Aleee” Eyiowuawi’s first extended play (EP) album- OgaSecretary.

I had followed the build up to the album release on Twitter, and because I had heard some of Bash Aleee’s voicenotes in the past, I retweeted the album’s publicity tweets, as a passive endorsement. I was not anxious, save for a mild sense of expectation that surged once and again, nothing out of my normal.

The album was released electronically on Spinlet.com, with a link, a covert that revealed the seven minute playtime of an eight-track skit, of an obnoxious, unctuous, and sometimes lewd secretary, who always answers his Oga’s call. Each track was named from the opinion the secretary gives us about the unknown caller. The EP is a comedy, short episode satires, and a series of musically planted rhymes. It is a sharp reminder of Gbenga Adeboye, what he could have attempted, should his pidgin be both comical and poetic.

Bash Aleee awakes us well with his first skit, Curriculum Vitae. The caller seem to be wanting a job, the secretary knows him or her well for calling the Oga’s number tirelessly in hope of an employment. It is the first window that we have of the secretary, a sincere one that opens to him insulting and warning the caller to desist from disturbing his Oga’s line. He tells the caller, in raw sarcasms, to go give the plantain-seller his or her CV, as the plantain-seller will both find good use for it, and might even have an employment placement for the caller.

The track sets a good precipice to understand the secretary’s plight from, too many people call his Oga, and sometimes, he has to make sure that the callers were serious and not just flashing, which is why he carries out a Test (Track 2). He asks the caller to make a selection if they were flashing or calling, in flippiant mimicry of the voice you hear to make selections when you call the customer care line.
If na flash hold on//
Shebi you know my oga na big don//
He will be with you soon//
Let him kindly get his swag on.

The secretary was lewd in the third track, Toast. The caller was a lady he likes, and he attempts to soft-talk her, he advices her to call back so she could hear his voice again. This is how the secretary doesn’t hide his emotion towards the callers, making a sharp contrast to how he answers the call of a Toaster on track four, this time, a man was calling his now-female Oga. The secretary shouts at the caller in pidgin, making jest of the him and his laughing friend.
You even know say she don save your numba as Mufu rewaya?//
You wey dey laff sef, she save your  numba as Marcus flat-taya//

Through several funny, yet almost life-like scenarios, the secretary addresses his Oga’s callers, and each time, you’d laugh or clap; severally, you’d do both. The quality of the recording, and its almost free price, made my decision to download the album easy, it was unthinkable not to. The best-spent sixty naira of my life.

Once, some days before the album release, @Bash_Aleee tweeted a picture of the album art, a monochromatic sketch, mostly geometric, circled in an abstract aura. It looked like something Laolu Sebanjo had done, save for its deeply geometric layout.
A telephone is placed in the center of the art, its box bears the name Bash Aleee, and Oga Secretary is curled along the shape of the receiver. These are all foreground, atop series of well-fitted abstract background, where to the left, I made out the track lists.
The album art is everything an album art should be, it is inviting, provocative and luring all at once. I am a sucker for great album art, and I think sometimes in my later life, I might begin to collect them. It is the knowledge that Bash Aleee had hand-sketched this art that impressed me, rarely do we see an artist transcend both visual and audio forms of art to present a single project. As though he had gathered several fresh fruits into a blender, and whirled them against its blade till it is a smoothie.

I hear the skits will be available as caller tunes this month, I’m going to make Vacation, track seven, my caller tune, I’d like to have Bash Aleee bash my callers:
Abi na million you wan give am?//
Wit dat your bia-bia, see as you resemble christmas ram//
Wetin you eat this morning, is it not yam?//
Poor man! 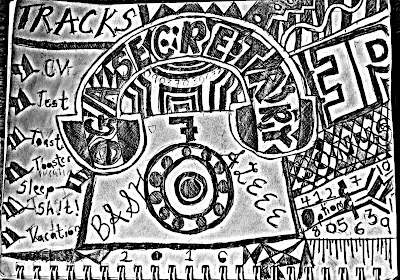 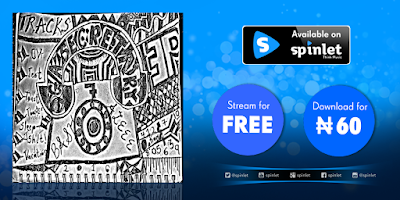 The Oga Secretary EP is still available on Spinlet and Soundcloud .
Oga Secretary caller tune codes will be released later this month.
More views and reviews are always welcome. Dodogang13@gmail.com.

When To Start A Branding Process By Wunmi Eruaga